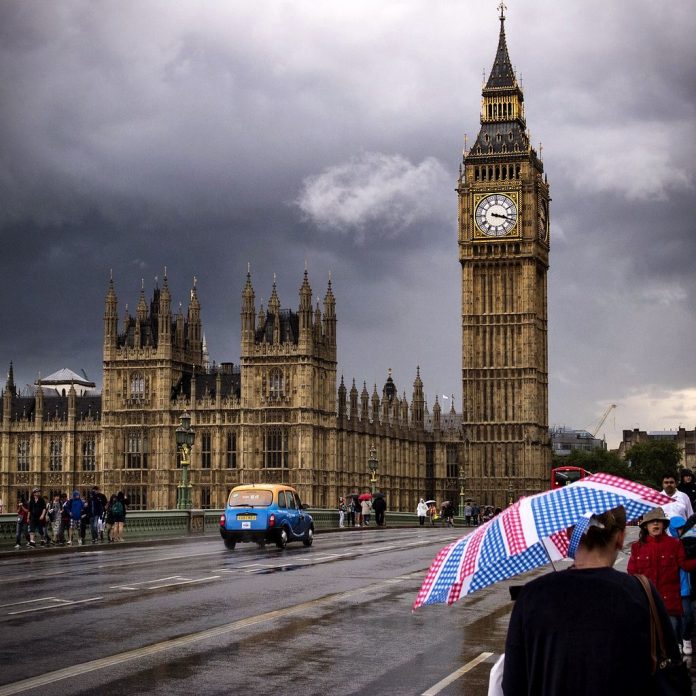 It is well known that in the British Isles it’s customary that it rains a lot. Whether you come for tourism or to live, you should remember to bring an umbrella and a jacket. But, why is it always cloudy in the UK? The reason is basically because of its geographic location and we will see. Britain is particularly cloudy because it’s located in the Warm Gulfstream. The heat necessary to evaporate all that water was absorbed off the African American coast, and then transported along with the water.

The Atlantic Ocean and its influence

One of the greatest influences on the climate of the UK is the Atlantic Ocean, and especially the North Atlantic Current, which provides warm waters from the Gulf of Mexico to the water masses around the island, via the thermohaline circulation. Thus there is a powerful climatic moderation and warming effect on the island – the North Atlantic drift warms the climate to such an extent that without such a current there would be winter temperatures about 10 °C (18 °F) lower than at present. The current makes it possible for England to have vineyards at the same latitude as Canada with its polar bears. That warm ocean current also provides a substantial input of moisture contributing to the notoriously humid climate of the western parts of the UK.

The sudden changes in climate are due to the convergence of warm air currents from the tropics and cold air from the north pole; this causes the variation in the temperature of the atmosphere to create instability. In turn, the proximity to the Atlantic Ocean acts as a moderator of temperatures and the northern latitude of the region allows long days in summer and prolonged periods of good weather in the UK throughout the year.

On the other hand, although rainfall is fairly similar throughout the year, between September and January is the wettest season and from March to June the driest period. Likewise, the mountainous areas located to the west and north are wetter than the central region.

What is the best time of the year to visit the UK?

The weather in the United Kingdom is favorable for travel from May, when the first warm days begin, until October when the sunny days give way to rain and cold. The best months to visit the United Kingdom are between July and August, in the middle of the British summer.

Generally speaking, the weather in the United Kingdom is rather mild, because although climatic changes are sudden and frequent, temperatures do not reach extreme values – in fact, the maximum in summer does not exceed 32º C and the minimum in winter is not less than -10º C – so the thermal amplitude is rather scarce.

Every city is different

Northern Ireland, Wales and parts of western England and Scotland are much closer to the Atlantic, making them the warmest, windiest and wettest parts of the UK, yet temperatures are sometimes much more extreme.

This is a much drier country and has much less rainy days in the year than Scotland.

One of the things that makes Scotland stand out from the rest of the UK countries is that it has the coolest climate all year round.

Wales has the warmest temperature all year round compared to Scotland and in winter it has higher minimum temperatures than England.

Visit to: Can citizens of commonwealth countries vote in the UK?